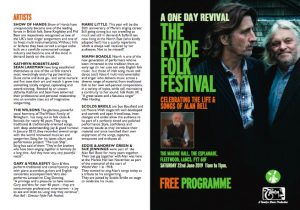 A REVIVAL OF THE FYLDE FOLK FESTIVAL

A CELEBRATION OF THE LIFE & MUSIC OF ALAN BELL

The idea of reviving the Fylde folk festival for one day was first suggested to Alan about eighteen months ago, by a great local supporter of Fylde.

He did not have to think for very long, before saying “Yes”. So the idea of reviving Fylde began! We would present three concerts in one day.

Who to book after all those artists who appeared at Fylde over the years? The artists appearing have all been on the bill at Fylde.

We are very grateful to the following who kindly agreed to appear: Show of Hands, Kathryn Roberts & Sean Lakeman, The Wilsons, Stanley Accrington,

Alan was due to celebrate his 85th Birthday on 26th June, so why not combine the Revival with his birthday.

Sadly, Alan passed away in April. One of his last wishes was that the Fylde Revival Day went ahead.

This day will be a Celebration of his songs and music.

A vast raft of some of Alan’s favourite folk artists, including: