Show of Hands have unequivocally become one of the leading forces in British folk. Steve Knightley and Phil Beer are respectively recognised as one of the UK’s best singer songwriters and one of its finest multi instrumentalists. Without frills or fanfares they have carved a unique niche built on a carefully constructed cottage industry and become one of the most in-demand bands on the circuit. 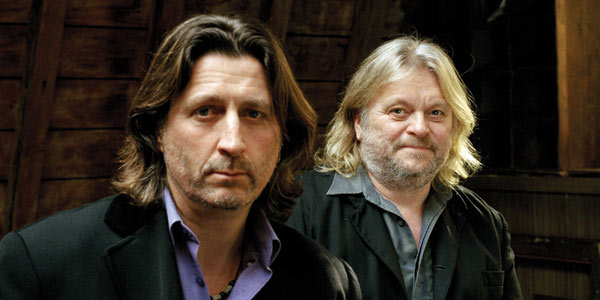 For The Wilsons, singing is their life – not a matter of wealth or fame. A
family for whom the phrase ‘down to earth’ could have been coined,
there is absolute commitment and integrity in their performance, although
they are not above the occasional irreverent aside… Although their
musical heritage is absolutely that of the North East of England – rural
and industrial, traditional and modern – they are happy to take on a good
song from anywhere, championing the work of other singers and
songwriters.

Duos come and duos go… And some nurture and fine tune their art and watch it grow into something totally original, captivating and award-winning. Bonded by an unseen alchemy, Kathryn Roberts and Sean Lakeman have entwined their professional and personal relationship into an enviable class act of imaginative songwriting and musicianship.

Marie Little is a native of Salford and now lives in the North East of England. She has been around the folk scene for many years and has appeared at clubs and festivals all over the UK and Europe. A well-respected figure on the folk scene, her CV includes a number of albums as well as TV, radio and Festival appearances.

Stanley emerged from the dark days of the late 1970’s and has been terrorising the cultural world ever since.

He has written hundreds of songs in a range of styles on a vast rake of subjects. There are old-style songs on current happenings and modern style songs on ancient events. There are poems, pastiches, parodies, and possibly anything.

Apart from the silly and very silly material, Stanley has always been writing serious songs to confuse the situation further. He has performed hundreds of times at a wide range of events all over UK and occasionally beyond.
Stanley has been performing all over UK and occasionally beyond at a wide variety of locations and events. He always tries to be both relevant and entertaining. (The pigeon-hole to put this stuff in is “miscellaneous-ish”)

Alan Bell is a veteran singer/songwriter from the North-West of England. His best-known songs, amongst many, are Windmills and Bread And Fishes – the latter was recorded in several countries and was a hit in Japan. Alan also wrote for a number of radio and TV productions.

Scolds Bridle have been entertaining audiences throughout the UK and abroad since they were barely out of their teens. They epitomise the art of Folk entertainment and continue to enthral audiences with their unique style and humour.

Niamh’s one of the new generation of performers who’ve been immersed in tradition from an early age (in her case not only that of English folk music but those of Irish song, music and dance too!). Fatea A multi-instrumentalist and singer who delivers music across a diverse range of material, from traditional folk to her own self-penned compositions, in a variety of styles, while still maintaining a continuity to her sound. Folk Radio UK She creates an intriguing mix of traditional and modern music Folking.com with an artistic maturity beyond her years. “A great talent and a fabulous singer” Mike Harding

Thistle are one of the best exponents of live music (no button pushing or backing tracks ) with their raw infectious sound with the odd mistake to keep you reminded that it is live ( as if you need reminding ). The repertoire has evolved over the years by experiment and suggestion by the audience as the band believe the audience are as much a part of the evening as the performers and to come away from a Thistle gig is to come away with a feeling of being part of the event.